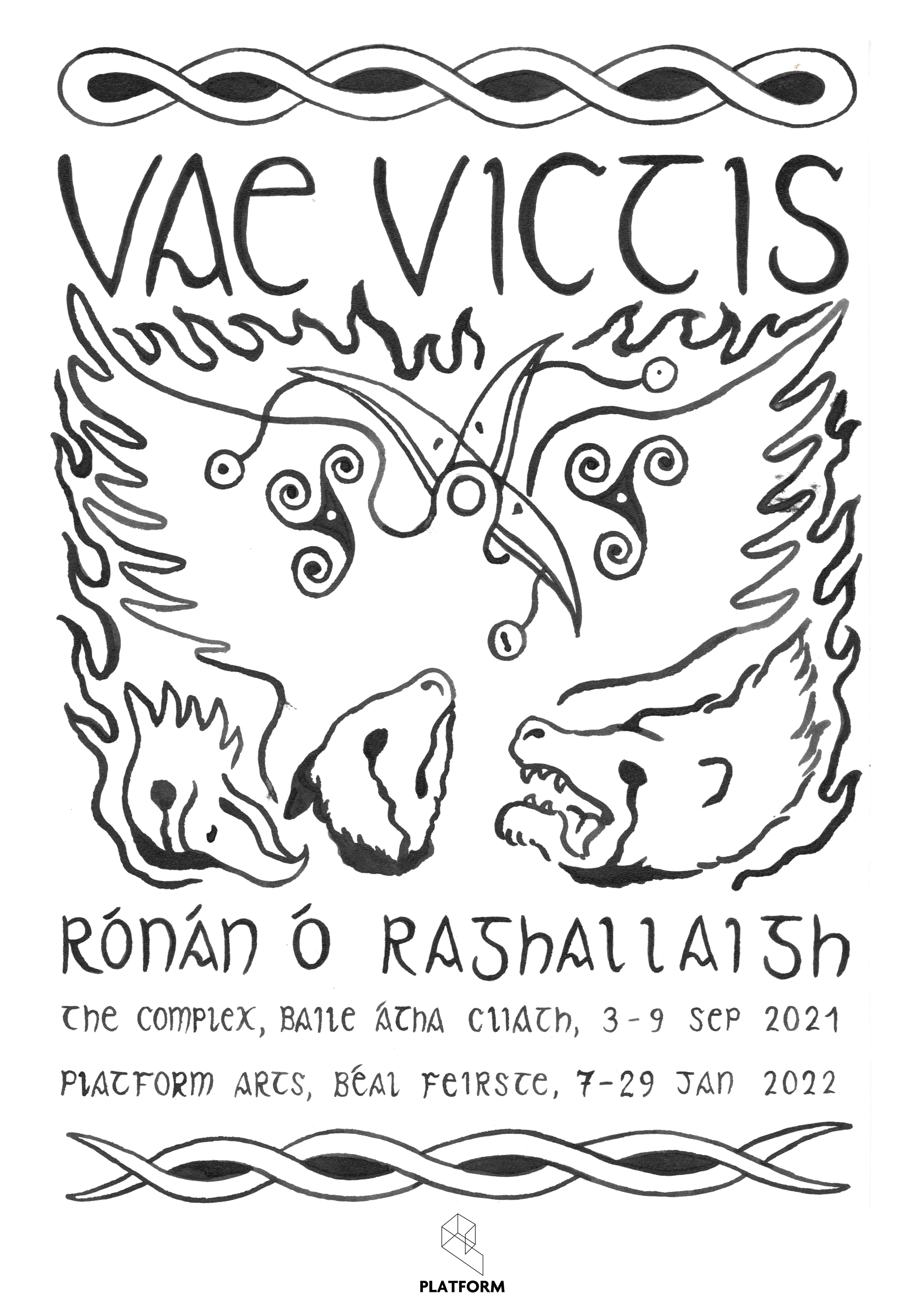 In Celtic art dere’s a motif: bodies with two faces lookin in opposite directions. Dey’re carved into
stone; gods or goddesses in deir own right but named after de Roman deity Janus.
Janus: But we’re not de Roman Janus! Yee gobshites only call us dat cos our original names are lost
and yer blind to things unless dey’re through a Western or Graeco-Roman lens, aren’t ye?
De Janus faces can be found in Celtic art across Europe. Dere is one in Éire on Boa Island in
Fermanagh, de island o de Crow Queen. Here, Janus is one side male, one side female. It was carved at
a time which predates full Irish conversion to Christianity. It is a remnant of our pagan past, our
worldview shared with others across Europe and de globe, largely crushed, burnt and mutilated in
Britain by de Romans and in Éire by de Christian Church and de British Empire.
De Janus faces give us an alternative framework to think about de Celtic in de 21th

century; dat of de
druidic philosophy of complimentary contradictory duality. Dey form a binary, bur crucially dey’re of
de same body: de Third Space which connects dem (remember de Newgrange triple spiral won’t yee.)
Janus: look one way, look de other way, look both ways at the same time, look neither way. Try
gettin yer head around that, amadán.
…
In 2018 I spent a year on colonised land: what de Anglo-West calls Toronto, originally Tkaronto. Dere were statues o Churchill, de queen was on de $20 note and de legacies o traumatic experiences
like de forced residential school system hung in de air like an aul púca at de crossroads.
In Tkaronto I was a person of ancient heritage and felt sympathy with de indigenous people dere. At
de same time, de complexities o my culture meant nothin and I was another European doin well in a
foreign land who hadn’t a clue about de indigenous history dere. Or maybe I was just tryin to benefit
from de same colonialism dat has affected me own island, like all de other naive (or shrewd) Paddies
have done.
Ériú called me back and I began de paintins dat became Vae Victis.
…
In 390 BC, a group o Celts invaded and took over Rome. After lootin it, de chieftain Brennus agreed
t fuck off if dey were paid a thousand pounds o gold. One o de Romans complained dat Brennus’ scales
were tampered with, so Brennus threw his sword on dem and said, Vae Victis: Woe to the
Vanquished, ye’ve lost so yer at me mercy, good luck to ye horse, slán leat.
…
For de benefit of yee unrememberers, I’ll remind ye o de Celtic relationship with de West. We have
often been admired as de fiercest o warriors, de wisest o druids, de most inspired o poets and
artisans, de most beautiful and powerful o rulers. However, dere has always been a notion dat we are
somehow inferior to de other great cultures o Europe, we are too dangerous, too wild. De Greeks,
Romans and Christians all felt dis to some degree, but de attitude was most aggressively embodied by
de British Empire in an attempt to justify de suppression o de Welsh, Scottish, Irish, Cornish and
other difficult feckers on dese isles. Cos as yee know, we all share a Celtic heritage but colonialism
depends on a binary. Derefore, Britian posited itself as Anglo-Saxon or even Classical in opposition
to de Celtic, ignorin or denyin its own Celtic roots. It was even surmised dat de Celts of Éire were
not real Europeans at all, havin roots in Asia or Africa instead. Us Celts became people o de past; we are backwards, primitive, feminine, childlike, dreamy, superstitious, and dangerous in direct
opposition to de rational, modern, masculine West. We are barbarians.
…
Vae Victis is a series o paintins whose subject matter is de suppression o de Celtic by de Roman
Empire, de Christian Church and de British Empire. Dey are part of a larger cultural rebellion, me
own 21st
century Celtic Revival, an attempt to decolonise de psyche somehow 100 years after de Irish
Republic was formed.
Dese are anti-history paintins. Dey are anti-colonialism paintins. Dey are stories o me people, of
victory, loss, tragedy, pain, embarrassment, betrayal, rebellion and revenge. Dey look down into some
o de murkier pools of Irish history.
Dey are de work of a druid who seeks both physical and spiritual peace but cackles while stirrin up de
bloody broth in his cauldron.
Dere has been no attempt by meself to be impartial or to represent Irishness as a whole, or to be
consistent: de stories were chosen simply cos dey’ve stuck with me since I was a young lad or I’ve been
drawn to dem in recent years. Dey are a response to me own experience as a postcolonial subject,
rooted in me beloved plains o Cill Dara and de hills o Wicklow.
Dey are about men, women, both and neither.
Dey interweave myth with history, just as us Irish have done since day one.
Dey depict de Other, as victim and bloodthirsty savage and somethin else.
…
Early 20th Century Celtic revivalism was a direct response to anti-Celtic rhetoric – we finally took
on de Celtic mantle with pride and said fuck yiz, ye can stick yer West. It was reactionary, and full o
potential problems like blind romance and nostalgia. It is tired now but it was a necessary first step
in mental decolonisation.
…
After de revivalist fever died down a bit, a new Celt emerged, and is still in its infancy. Artists from
Éire and beyond began to incorporate de Celtic in deir art with roots in surrealism, abstraction, land
art, performance and so on. Writers like James Joyce and Flann O’Brien sacked de English novel with
de Irish language and myth. And o course, other colonised peoples around de world have been involved
in a similar process.
De spiral turns and de snake sheds its skin. De new Celt is darker, muckier, more unsure, more aware
o de actualities of our past and present. We know dat we are de divine Tuatha dé Danann but also de
monstrous Fomorians. We remember gold go leor and sunsets over Tír na nÓg and beautiful kings
and queens and great feasts and festivals but also ruthless sacrifices, forest cults, wearin de heads of
our enemies around our horses’ necks, bathin in blood, slavery, piracy, roadside ambushes and de rest.
…
Vae Victis is a development o me own visual language, a hybrid o me Celtic inheritance and de
Western paintin tradition. History, myth, selfhood, division, oneness, blood and honey are all fucked
into me own bubblin druid’s cauldron. Drink yer mead, burn it all and grow again among de blood.